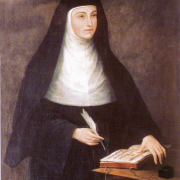 Over the course of a thirty-year literary career, the licentiate Luis Muñoz (b. ca.1594; d. 1646), a bureaucrat at the courts of Habsburg kings Philip III and Philip IV, published the Lives of eight contemporary religious figures. He was the most active writer of this kind in seventeenth-century Spain and his works were held in high regard by his peers; they have, however, largely been ignored by modern scholars.

In lifting the lid on Muñoz’s literary activity, this paper poses and seeks to address a number of questions. Muñoz’s motives for bringing to light the ‘lives and virtues’ of his eight subjects are considered, as is the extent to which his narrative accounts were circumscribed by the demands of religious orthodoxy, the genre to which these literary portraits belong, and their relationship to the better-studied disciplines of religious sculpture and pictorial art.