Larger than Life: The Malek ol-Tojjar family at the interface between Russia and Iran during the long Nineteenth century 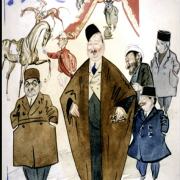 Part of the Lecture Series on Russia-Iran interactions co-organised by MIHAN and REES.

The story of Russian-Iranian relations is essentially the tale of neighbours who, on a national or individual level, clash or collaborate as circumstances demand. As such it goes back much further and deeper than generally assumed. After a brief summary of the historical background, this talk will illustrate how Iranian lives were affected as the balance of power between Russia and Iran changed in the nineteenth century as the reversal of relations resulted in loss of territory and migrations and how they impacted lives not only politically, economically, socially and culturally. A few brief examples from personal lives will be given to highlight the extent of that impact, but the main focus will be on the Malek al-Tojjars, as the careers of father and son closely trace the history of Russian-Iranian relations from the early nineteenth century to the aftermath of the 1917 Revolution and include three key events of the economic Great Game as it heated up in the second half of the nineteenth century, namely the Tobacco Rebellion of 1891-92, the rivalry between the British and Russian banks, and the fate of Iran’s first joint-stock company and its subsidiary, the Ardabil-Astara Road, all of which illustrate the pitfalls that lie on the path of private and public initiatives in a period of transition.

Fatema Soudavar Farmanfarmaian was born in Tehran in 1940 and currently lives between London and Geneva. She is a fellow trustee of the Soudavar Memorial Foundation and an independent researcher and author who has written in English and Persian on a variety of subjects. Her articles have been published academic journals and co-authored books as well as on the Internet.