Breed: The British & their Dogs 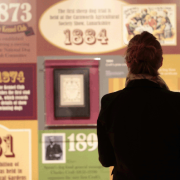 The history of the British Isles and its inhabitants, both human and canine, has long been entwined. Breed reveals the enduring and affectionate relationship between the British people and their dogs and explores the very beginnings of pedigree dog breeding in Britain.

The exhibition focuses on six pedigree dogs: bloodhound, borzoi, bulldog, collie, Irish wolfhound and Pekingese. Each breed highlights something unique about British history and culture and the connection between human and dog, from the bloodhound’s role tracking down Jack the Ripper to the patriotic spirit the bulldog embodied during WWII.

This exhibition has been developed with The University of Manchester’s Centre for the History of Science, Technology and Medicine. With thanks to the AHRC.