Realist Utopia: Houses and Neighbourhoods in 1920s and 1930s Milan 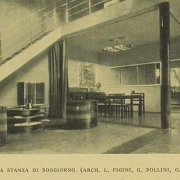 Realist Utopia: Houses and Neighbourhoods in 1920s and 1930s Milan

During the Fascist regime, Milan became the centre of Italy’s artistic and cultural affairs. While the political power stayed in Rome, Milan enjoyed a much higher degree of experimental freedom with what it was perceived as a suitably vague aesthetic claim towards ‘modernity in the arts’. In this seminar, I will discuss the notion of artistic modernity as embodied in some architectural projects which were aimed at changing the urban fabric and social configuration of Lombard capital. By looking at designs of new types of houses for the new working and middle-classes as well as at those for the construction of entirely new neighbourhoods (the rationalist villas of the V Triennale, the case tipo, or the Rebbio district), I will draw some conclusions on how the aesthetic and political ambitions of the Fascist regime were becoming ‘real’ in projects for urban regeneration which often remained utopian in nature, thereby showing both the paradoxes laying at the centre of the regime’s policies on the arts and the contradictory nature of its conception of modernity.

Francesca Billiani is Senior Lecturer at the University of Manchester. Her research focuses on the Fascist period, censorship, literary journals, modernism, history of publishing, and intellectual history. She is the author of a monograph on the politics of translation in Italy (1903-1943), co-author of a monograph on architecture and the novel during the Fascist regime, editor of a collection of essays on translations and censorship, and co-editor of a volume on the Italian Gothic and Fantastic and of three special issues of scholarly journals. She was an AHRC-Leadership Fellow with the project ‘The Dialectics of Modernity’ (2016-2018) and she her monograph on the system of the arts in Italy entitled Fascist Modernism. Arts and Regimes will be out next year.