Biophysical stimulation of stem cells on biomaterials and in biomicrofluidic device: in vitro and in silico studies 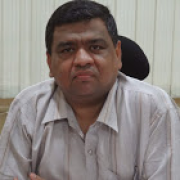 In the field of biomaterials science, the phenomenological interaction of a biological cell with a synthetic material is influenced by several factors, eg: elastic stiffness, surface topography and wettability. In this context, the results of a strikingly different approach, involving intermittent delivery of electric stimulation to manipulate cell functionality on electroconductive biomaterials will be discussed. I will present both the experimental results and theoretical foundation of our ongoing research

with appropriate boundary conditions for the biological cell system, as well as MD simulation based studies for protein adsorption on biomaterial substrate and protein-membrane receptor interactions, both under the influence of electric field. This presentation, encompassing experimental results and theoretical analysis, is expected to provide guidelines to develop next generation biomaterials and biomedical devices for regenerative medicine.

Dr Bikramjit Basu is currently a Professor at the Materials Research Center and holds Associate Faculty position at Center for Biosystems Science and Engineering, Indian Institute of Science (IISc), Bangalore. He is currently Honorary Professor at University of Manchester, UK and Guest Professor at Wuhan University of Technology, China. After his undergraduate and postgraduate degree in Metallurgical Engineering from NIT Durgapur and IISc respectively, he earned his PhD in the area of Engineering Ceramics at Katholieke Universiteit Leuven, Belgium in March, 2001. Following a brief post-doctoral stint at University of California, Santa Barbara; he served as a faculty of Indian Institute of Technology Kanpur during 2001-2011. Prof Basu’s contributions in Engineering Science have been widely recognised. He is the first ceramicist and biomaterials scientist to receive in 2013, India’s most coveted science and technology award, Shanti Swarup Bhatnagar Prize, which was first awarded in 1958. He remains the only Indian from India to receive the prestigious ‘Coble Award for Young Scholars’ (2008) from the American Ceramic Society. A Chartered Engineer of UK, he is an elected Fellow of the American Institute of Medical and Biological Engineering (2017), Institute of Materials, Minerals and Mining, UK (2017), National Academy of Medical Sciences (2017), Indian National Academy of Engineering (2015), Society for Biomaterials and Artificial Organs (2014) and National Academy of Sciences, India (2013). He is on the advisory board of several National R & D labs and medical device manufacturing companies in India and currently serves as an independent board of Directors of AMTZ Medi Valley Incubation Council, Visakhapatnam. He has published over 250 peer-reviewed research papers in leading journals (total citation ~ 9600 and H-index ~ 52). He is currently leading India’s major translational Center of Excellence on biomaterials with an interdisciplinary team of 50 researchers, clinicians and companies.