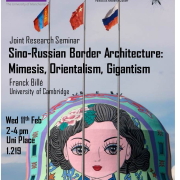 Abstract The Chinese town of Manzhouli, on the border with Russia, is home to the largest matrioshka doll in the world. The booming Chinese town itself is built in the European style and is replete with Russian symbolism. Unique for its particular blend of Chinese and Russian features, Manzhouli is in fact but one of many sites in China where the foreign and the exotic have been replicated. Copying practices have long been associated with East Asia, and descriptions of Asian cultures as adept at copying but lacking imagination and creativity are a common fare of Orientalist discourse. If today these narratives are focused primarily on China, in the 1980s the prime spot was occupied by Japan. These narratives undeniably share a common genealogy, but they also drastically differ on account of their scale. Japanese copies, associated with the miniature and the “cute,” make them eminently containable. Chinese practices by contrast are associated with the monumental and the gigantic. The paper will argue that Chinese mimetic gigantism, through disruption of the line separating China from its neighbors, is in fact intimately tied to the territorial anxieties felt among many of China’s neighbors.