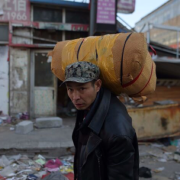 On the evening of November 18th, 2017, a blaze broke out in the basement of a two-storey building in Xinjian urban village, located just outside Beijing’s Sixth Ring Road. At least 19 people, including 8 children, died in the flames. Yet in the days that followed locals had no chance to mourn: before the gutted building was even fully soused, the local authorities had issued a comprehensive eviction order for Xinjian. Using fire safety as its rationale, the city government condemned the entire settlement, and its inhabitants, perhaps as many as 250,000 of them, were forced to evacuate their homes. Xinjian had emblematized inequality and exclusion well before the fire and evictions of 2017, and its residents long counted among contemporary China’s most precarious people. What kind of change, then, might the evictions mark? Or to put this another way, what does it mean to be officially banished from a place of already de facto exile?

In this talk, I suggest that the evictions provoke questions about the limits of inequality, exclusion, and and insecure work as meaningful descriptors of social conditions in our times. These limits have prompted Saskia Sassen to argue that we are now witnessing “the emergence of new logics of expulsion” in the global political economy – forces which make the language we use to describe immiseration on a systematic scale too tepid and which compel a rethink of how we define precarity, surely a master concept for the present. In this talk, I explore the logic of expulsion in contemporary China, its capacity to foment both solidarity and social strife, and its relationship with cultural forms. In particular, I look at how people living under precarity in China today use culture as a space to vent feelings of rage, resentment, distrust, and disdain that are taboo under the diktats of so-called harmonious society.

Biography: Margaret Hillenbrand is Professor of Modern Chinese Literature and Culture at the University of Oxford. Her research focusses on literary and visual studies in twentieth-century China, Hong Kong, Taiwan, and Japan, especially cultures of protest. Her latest book is Negative Exposures: Knowing What Not to Know in Contemporary China, which appeared with Duke University Press in 2020. She has recently completed a new book project entitled On the Edge: Feeling Precarious in China, from which this talk is drawn.