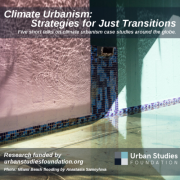 This event will present some of the pioneering research funded by the Urban Studies Foundation (USF) in recent years. The event will showcase five short interventions that cover several of the COP26 Presidency campaigns, with a key focus on Cities and the Built Environment.

Five USF Fellows from around the world will offer radical responses to urgent questions, such as: is urban resilience the final form of urban climate change adaptation? Should the urban as we know it survive climate change at all? Fellows suggest ideas for a developing climate urbanism that builds on and incorporates strategies for just transitions. They show that urban sustainability transitions are not only critical in addressing the climate emergency, but also in making cities generally better places to live (Dr. D?browski); that achieving equitable urban resilience is only possibly by transforming public and private finance as we know it (Dr. Ponder); that local politics and histories should play a critical role in the ways we think about and develop approaches to mitigating the impact of the climate emergency (Drs. Rehman and Parikh); that the neighbourhood, rather than the city, may be best suited for climate intervention (Prof. Pickerill); and finally, that and that we may have reached the end of the urban age altogether, forcing us to radically rethink how we envision the future of the city (Dr. Wakefield). Case studies will be discussed from a range of countries in both the Global North and South.

The event will be Chaired by Dr Deljana Iossifova, Senior Lecturer in Urban Studies at the University of Manchester and the current Chair of Trustees for the USF. The time allocated to the event provides a buffer for audience questions at the end of each presentation.

The Urban Studies Foundation is a Scottish charitable organisation founded in 2008. Our aims and objectives include advancing academic research and education in the field of urban studies. We realise these outcomes primarily through the provision of grant funding for individuals and institutions engaged in ground-breaking urban research and knowledge mobilisation around the world.

1. Unlocking the potential of sustainability transitions to make cities more just and liveable

https://www.tudelft.nl/staff/m.m.dabrowski/ Cities are the main culprits in terms of carbon emissions. It is in cities that the effects of climate change, from heat stress, to damage and casualties brought by extreme weather, to coastal flooding, are the most acutely felt. But cities are also where technological, environmental, economic, social, and political innovations needed to mitigate and adapt to climate change and usher in more sustainable futures are designed, experimented with and upscaled. Against the backdrop of insufficient or sluggish national climate policies, cities are able to respond to the growing demand from citizens for taking more decisive and meaningful actions in the face of the climate crisis. However, the debate on how to enact urban sustainability transitions tends to focus on economic shifts or technological fixes. At the same time, the distribution of benefits of green urbanism across social groups and neighbourhoods remains deeply uneven, while access to decision-making on sustainability strategies and policy is restricted to the most influential and resourceful stakeholders. Building on the notion of spatial justice and lessons from a selection of urban experiments in planning for climate resilience, socially inclusive circular economy energy strategies, and nature based solutions for climate adaptation and mitigation, this talk will shed light on the underused potential of urban sustainability transitions to make our cities not only climate-neutral, but also more liveable, vibrant and fair. It will also identify the key barriers for tapping into this potential and demonstrate how to overcome them by bridging policy agendas and co-producing change with the citizens.

In recent years projects geared toward promoting urban resilience have been at the forefront of innovations in climate change governance. Developing an appropriate financial ecosystem to support such projects and foreground climate justice has been a challenge, however. Public-private partnerships have failed to deliver equitable access to the benefits of sustainable communities, many philanthropic initiatives lack democratic accountability, and green bonds are not living up to expectations in terms of uptake by issuers or ecological results. Meanwhile, marginalized communities, who are themselves often at the ‘frontlines’ of climate change, continue to face differential treatment in bond markets due to the impacts of ongoing and historical racialization. Rather than continuing to lean on activities and innovations that are largely governed by the private financial sphere, this intervention proposes that achieving equitable urban resilience is only possible by reimagining the work and responsibilities of public, as well as private, finance.

The recent arrest of 21 year old climate activist Disha Ravi, in the wake of an authoritarian crackdown on the peaceful uprising of farmers in India, brings urgent attention to local politics shaping global climate change and its differentiated place-based experience. Thinking through such forms of visible violence, as well as everyday processes of marginalization, we argue that a just approach to mitigating the effects of climate change and building resilience needs to consider how atmospheric, biophysical, and ecological changes occur in conjunction with local politics and histories. We present ‘urban climates’ as a framework to develop a comparative perspective on the inseparable linkages of environmental and social violence in the wake of urban development and environmental change in South Asia. We focus on how environmental vulnerability comes about and ground planning agency in local experiences to provide openings that can reorient climate action through the voices of marginalized and affected communities.

? 4. Eco-communities as ways to radically transform our cities

Eco-communities are permanent interventions to build and reshape cities in ways that reduce CO2 emissions and ensure more inclusive and liveable cities. Using examples from already-existing urban eco-communities the ways such projects demonstrate lasting material, social and economic transformations are illustrated through three examples of; generating affordability, designing for frequent social interaction, and repurposing marginalised public urban spaces. These examples are scalable to city level, but would work best if replicated and reworked by neighbourhoods, rather than taking one-size-fits-all approach to climate urbanism. However, for many eco-communities there are often gaps between their imagined politics and their realisation. This means that people are excluded by race and class. Eco-communities appear to offer affordable solutions but still require some capital investment and often private property ownership. Therefore any suggestion that they help positively reshape our cities has to include reflection on who these cities are being reshaped for. This need to ask who climate change policies are for, and who they exclude, extends to all initiatives and projects seeking CO2 emission reductions. This is vital if we are to ensure just and inclusive transitions to a less environmentally-damaging world.

5. Urbanization in the anthropocene: urban adaptation beyond resilience in Miami, Florida

The Anthropocene is routinely envisioned as an urban age, in which the majority live in cities and once-distant sites are integrated into a social-ecological network of urbanized processes and technologies stretching to the ends of the earth. But is planetary urbanization the only possible way of life in the Anthropocene? Is urban resilience the final form of urban climate change adaptation? Will and should the urban as we know it actually survive the upending impacts of climate change or human responses? This presentation considers these questions via discussion of sea rise and flooding adaptation in Miami, Florida, a city seen by many as climate change ground zero in the U.S. and an image of urban futures to come. There, taking global warming and local geology seriously is pushing planners and policymakers to think beyond dominant but already-obsolete urban resilience approaches and toward more radical adaptive strategies. Looking at one such proposed strategy to retire the city and repurpose it as fill to create ‘The South Florida Islands,’ a self-sufficient territory of artificial high-rises delinked from global chains of energy and production, I explore the possibility that rather than an age of endless urbanization and urban resilience incipient may instead be an ‘urbicidal Anthropocene.’

The event will be chaired by Dr Deljana Iossifova, Senior Lecturer in Urban Studies at the University of Manchester and the current Chair of Trustees for the USF. https://www.research.manchester.ac.uk/portal/deljana.iossifova.html

Organisation: Department of Urbanism, Delft University of Technology, The Netherlands

Role: USF, Chair of the Board of Trustees