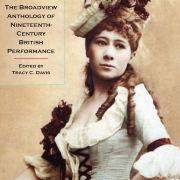 Of the 241 Victorian theatre critics known to have written for the popular press, only one is known to be a woman; she, Pearl Craigie (1867-1906), daughter of an American millionaire and a well-connected socialite, concentrated her efforts on writing fiction and plays. In stark contrast, new research makes a claim for a significantly earlier exponent of dramatic criticism. Amelia Chesson (1833-1902) was the lower-middle-class daughter of an anti-slavery lecturer, George Thompson, well-connected in the sense of knowing the leading Radical activists of her day but never coming to prominence in her own right despite a lifetime of reviewing live art, starting with the Liberal daily The Morning Star and concluding with a long stint as book reviewer for the Athenaeum. Focusing on the onset of Chesson’s career, this research asks how a middle-class woman could undertake such work in the 1850s. Evidence from Chesson’s diary (and that of her husband) demonstrates the kinds of spectatorial activities and social networks that first brought her this work, then sustained her ability to perform it on a semi-regular basis. What is particularly interesting about this case is not just that she represents a “female first” but rather how she garnered the expertise to make the work possible, when her fertility made it impossible, how she managed it in conjunction with domestic responsibilities, the assignments considered appropriate for or by her, and the practicalities of evening work and early-hours deadlines that she met.