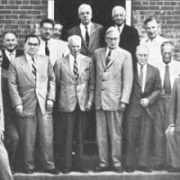 A mathematical physicist who was instrumental in a Nobel Peace Prize-winning scientific movement against nuclear weapons will speak at The University of Manchester on Wednesday 10 June.

Prof Francesco Calogero from the University of Rome La Sapienza will introduce the documentary ‘The Strangest Dream’, which tells the story of Joseph Rotblat’s efforts to halt nuclear proliferation.

Nuclear physicist Rotblat co-founded the Pugwash Conferences on Science and World Affairs - an international movement that brings together influential scholars and public figures concerned with reducing the danger of armed conflict.

The fascinating Eric Bednarski film brings to light Pugwash’s behind the scenes role in defusing some of the tensest moments of the Cold War.

As well as being a world-renowned scientist, guest speaker Calogero served as Secretary General of the Pugwash Conferences – and in 1995 accepted the Nobel Peace Prize on behalf of Rotblat and the organisation.

The screening of the film will be followed by an opportunity to put questions to Prof Calogero about his work and that of the Pugwash movement.

The special screening is part of the Robin Bullough Symposium at The University of Manchester, which celebrates the life and work of the late Manchester mathematical physicist, who died last year aged 78.

Bullough was best known as one of the discoverers of the soliton, a remarkable kind of self-reinforcing and solitary wave.

He proposed the idea of a soliton-based transmission system to increase performance of optical telecommunications and this is now commonly used in trans-oceanic optical fibre communication.

Bullough’s discoveries also led to revolutions in nonlinear mathematics and nonlinear physics and may ultimately play a role in the new sciences of quantum computing.

He joined The University of Manchester (then UMIST) in 1961 and was promoted to the Chair of Mathematical Physics in 1973. After retiring in 1995 he had held a position as Emeritus Professor at the University until his death in August 2008.

Price: The event is open to the public and admission is free, but pre-booking is required. People interested in attending should email Sebastian Rees at Sebastian.rees@manchester.ac.uk to reserve a place.