Peter Gries - COVID-19 and the Future of China's relations with the West, Revisited 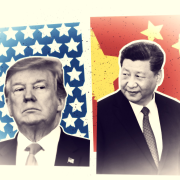 Webinar: Will future historians look back at 2020 and the COVID-19 pandemic as the start of a new Cold War? Professor Gries addressed this question in a webinar last May, and will revisit it in this October talk, more than nine months after COVID-19 first emerged in China.

Since May, US-China relations have further deteriorated, shifting from geopolitical to ideological competition. If a ‘Beijing Consensus’ of Authoritarian Capitalism is pit against a ‘Washington Consensus’ of Liberal Democracy, there will be few winners in a 21st Century Cold War. Much will depend on the results of the US presidential election in November, and whether the Xi administration continues to double down on its “Wolf Warrior” diplomacy.

Biography: Peter Gries 葛小伟 joined the University of Manchester as Professor of Chinese Politics in August 2017. After a fall of fundraising and a £5M donation endowing a new Manchester China Institute, in December 2017 he became the Lee Kai Hung Chair and founding Director of the Manchester China Institute. Peter was born in Singapore and grew up in Hong Kong, Washington, DC, Tokyo, and Beijing. He later earned bachelors and masters degrees in Asian Studies at Middlebury and Michigan, and a PhD in politics from Berkeley. After a two year postdoc at Ohio State, he was assistant professor of politics at the University of Colorado, Boulder for five years. He then spent eleven years at the University of Oklahoma, where he founded and directed the Institute for US-China Issues, and its two signature programs, the Newman Prize for Chinese Literature, and the US-China Diplomatic Dialogue. He studies the political psychology of international affairs, with a focus on China and the United States.