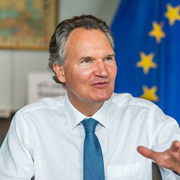 The 2019 Jevons Lecture in Science Policy given by Robert-Jan Smits, Open Access Envoy of the European Commission.

The event will take place on Thursday 28 March 2019, 5.30pm with a drinks reception afterwards.

Cooperation in science is THE success story of the European project.

Thanks to the Framework Programmes and flagship initiatives such as the European Research Council, each year, thousands of scientists from across Europe and beyond work together in partnership to extend the frontiers of knowledge and find solutions for the grand societal challenges.

Cooperation has also been enhanced through the creation of the European Research Area, but in other areas cooperation is increasingly put to the test. The values on which the European Union was founded are endangered and not just from within.

This calls for a special responsibility of the science community in Europe to speak out and lead by example, to make it clear that science cannot flourish without these values and that Europe’s scientists are proud to represent these values.

About the 2019 Jevons Lecturer, Robert-Jan Smits:

Robert-Jan Smits is the Open Access Envoy of the European Commission and the architect of Plan S, which aims to ensure that all publicly funded scientific publications are available in Open Access by 2020.

From 2010-2018 he was the Director-General of DG Research and Innovation at the European Commission, responsible for defining and implementing EU policy and programmes in the field of research and innovation.

He was one of the main architects of Horizon 2020, the 80 billion Euro programme for science and innovation (2014-2020) and also played a key role in developing the successor programme, Horizon Europe, for which the EC has made a 100 billion Euro proposal.

He was also instrumental in the development of the European Research Council and a whole range of other initiatives. He has received several recognitions and awards for his contribution to European science and innovation, including an honorary degree from the University of Edinburgh, a lifetime achievement award from EuroScience, the Academy Medal from the Royal Netherlands Academy of Arts and Sciences, the Excellence in Global Science award in South Africa, the Medal of Honour from KU Leuven and the Gold Medal from Academia Europaea.

He was one of Nature magazine's 'Ten people who mattered this year' in 2018 and recently received the Spark innovator award.

The Fred Jevons Science Policy Lecture commemorates the founding professor of ‘Liberal Studies in Science’ at Manchester. Manchester has long been a major centre for social, economic and historical studies of science and technology, a history consolidated by the establishment of a Department of Liberal Studies in Science in the 1960s. That scholarly tradition is today maintained by the University of Manchester’s Centre for the History of Science, Technology and Medicine and Manchester Institute of Innovation Research, which collectively constitute one of the world’s major centres of expertise in the social, historical, economic and political analysis of science and technology.

Fred Jevons was born in Austria in 1929, and came to the UK as a child refugee from the Holocaust. Originally a biochemist Fred was appointed to the first Chair of Liberal Studies in Science in 1966, an initiative to produce rounded science graduates better equipped to win leadership roles in government, industry and academia, promoted by leading Manchester science professors. Jevons enthusiastically took up this challenge, building a department and a curriculum from scratch. Jevons left Manchester in 1976 to become the founding Vice-Chancellor of Deakin University, but returned to Manchester during 1992 as a Simon visiting Fellow. He died in September 2012. His works include Wealth from Knowledge (1972), a landmark in the empirical study of technological innovation and the roles of science within it, and Science Observed (1973).