Hockney to Hogarth: A Rake’s Progress 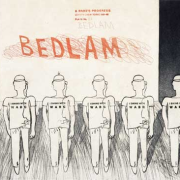 The Whitworth has been presented with David Hockney’s entire print series A Rake’s Progress (1961-1963) by the Contemporary Art Society. This joins William Hogarth’s eighteenth-century series of the same title, which has been in the Whitworth’s collection since 1926. To celebrate the coming together of these great works, this exhibition showcases both versions, unravelling their tales of transformation, youth, sexual discovery and unrequited love.

Central to Hockney’s story is his first experience of America: as a young, gay, northern art student visiting New York in 1961. Exploring the artist’s re-interpretation of Hogarth’s story of influence, freedom and moral corruption, the exhibition examines this pivotal moment in Hockney’s life and practice.

Drawing on themes of American and British cultural exchange, 1960s attitudes to homosexuality and creative discovery, Hockney’s A Rake’s Progress is enriched by a selection of wonderfully vibrant paintings produced by the artist between 1960-62. Also on display are several candid drawings made during Hockney’s Bradford-based adolescence.