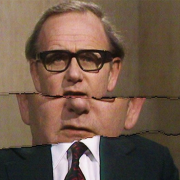 Tuesday Talks invites leading artists, thinkers and curators to explore the driving forces, influences and sources of inspiration within contemporary art. The series is a collaboration between the Whitworth and Manchester Metropolitan University and is programmed by Pavel Büchler.

Stephen Sutcliffe creates film collages from his extensive collection of video and audio recordings. His films and film installations weave together fragments of the written and spoken word and broadcast images to create complex and disjointed relationships. Exploring such themes as self-doubt, class-consciousness and cultural authority, Sutcliffe’s poetic and often humorous works gain their inspiration from an array of literary sources, film and cultural history, biographies and late night television. His recent solo exhibitions include The Hepworth, Wakefield and GOMA, Glasgow (2016), Rob Tufnell, London (2015), and Tramway, Glasgow (2013). In 2015 Sutcliffe won the Contemporary Art Society Award with Graham Eatough to produce a new commission for the Whitworth to be shown this summer.

Book your place by following the link below: https://www.eventbrite.co.uk/e/tuesday-talks-stephen-sutcliffe-tickets-32356121029

Image: Still from The Hidden God by Stephen Sutcliffe, 2014