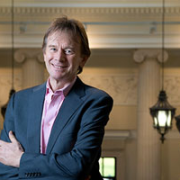 Michael Wood reflects on the history of Manchester and its people, using his own family history as a starting point: “We were Welsh slate quarriers, Cumbrian Scots and Pennine hill farmers who became Industrial Revolution toolmakers: throw in a Viking surname and an Irish marriage and we were the classic Manchester mix .... and that’s just the 19th century!” Come and hear Manchester’s favourite historian tell the story of the city and its inhabitants in a wide-ranging – as well as highly personalized talk – illustrated with stills and film clips. Originally from Moss Side Manchester, Michael has made well over a hundred documentary films – including In the Footsteps of Alexander the Great, Conquistadors and The Story of India – all of which were accompanied by best-selling books. His recent series, Story of England, was praised by the Independent as ‘the most innovative TV history series ever.’ He is also known for his work with community historians across the UK and is currently Professor of Public History at The University of Manchester. Welcome drinks kindly provided by The Co-operative from 6pm.

This event is part of the Manchester Histories Festival 21-30 March 2014 For more information please visit the website: www.manchesterhistoriesfestival.org.uk Booking information: Tickets: £7 / £5 Tickets can be purchased in person at the People’s History Museum or by visiting www.mhfmichaelwood.eventbrite.co.uk Join our mailing list by emailing: boxoffice@manchester.ac.uk