World War One Centenary Performance: 'Between the Lines' 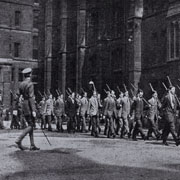 The performance is one of a number of ways in which the University’s history and heritage is actively used in teaching students, and is part of the University’s World War I commemorations. The performance has been devised, and will be performed, by undergraduate Drama students drawing on the writings and memoirs of their predecessors who experienced the War. The performance takes place in the Old Quadrangle, which has changed little in the intervening one hundred years and was used to drill students who were intending to volunteer to fight. The performance will respond both to the space, and to the real stories of those who lived and died during the war.

The event will run from 5pm until 6.30pm. It’s free and the performance allows the audience to move freely between four spaces in the Old Quad where students will be performing original pieces based on their work with university archive material from the First World War. At 5pm and at approx. 6.20 all the students will present a large-scale group performance with multi-media in the main square in the Quad.

There will be over 50 first year drama students who have been working with material from the archive since September. They have been looking at the Tout Letters and the University magazine from the 1914-1918 period. The letters were written to Professor Tout who taught history at the university and they come from his students who were fighting, nursing and otherwise involved in the war. There are some letters from conscientious objectors detailing their struggles with not fighting even though they were driving ambulances and helping the wounded in some cases.

The students are working with professional artists – James Macpherson who is the artistic director of Artizani outdoor performance company, Cathy Crabb who is a playwright, Martha Simon and Simon Brewis both professional theatre makers and directors. Alison Jeffers is the academic lead on the project and she is also involved with production and logistics. This is part of the students’ first year course on BA Hons Drama, BA Hons Drama and Screen Studies and BA Hons Drama and English.

The performance is FREE, no need to book. For further information about the performance, contact the Martin Harris Centre Box Office on: boxoffice@manchester.ac.uk or 0161 275 8951.