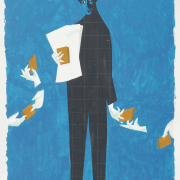 Marking 80 years since the wartime release of Robert Bresson’s first feature film Les Anges du Peche in 1943, and 40 years since the release of his final feature film L’Argent in 1983, The University of Manchester is proud to host the Notes of Bresson conference at The Martin Harris Centre in the of The University’s School of Arts, Languages and Cultures.

‘A forty year career and its influence reviewed from a distance of forty years: 1943-1983-2023’ will be the theme of presentations, panels and screenings, in addition to networking opportunities for this two-day event, which organisers hope will be a hive of creative and critical thinking and interaction between presenters and attendees. This coming together of Bresson-appreciators aims to increase collaboration between The University of Manchester and other institutions, forging deeper engagement between creative practitioners, academics, researchers, students and cineastes around Robert Bresson.

Hosted by The University of Manchester at the Martin Harris Centre, the conference will run in collaboration with Richmond, The American University in London (RAIUL), and the UK Bressonian Practice-Based Research Group.