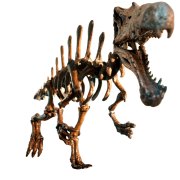 More types of dinosaur have been discovered in the last two decades than in the 200 years before. Many of these discoveries are from places we never realised even had dinosaurs. The opening up of China, exploration in the Arctic and the Antarctic and prospecting in the Sahara has led to the discovery of a new generation of bigger, badder and more bizarre dinosaurs.

This autumn the BBC will bring these incredible new dinosaurs to life, encouraging audiences to take their own investigative journey into the fascinating world of prehistory and palaeontology. BBC Learning has joined up with museums and science centres across the UK to embark on a BBC Planet Dinosaur Tour for 56 days throughout October to November.

At the dinosaur experience people will be able to build large-scale reproductions of Spinosaurus, the largest ever known land predator and learn more about the dinosaurs in the TV series.

Everyone is welcome, especially families.

Specifically the Tour aims to encourage people to understand the role of palaeontologists through scientific enquiry; explore the links between Spinosaurus and other dinosaurs; learn when dinosaurs lived and how that time-line relates to human evolution.

You can find the BBC Planet Dinosaur Tour at The Manchester Museum 1-9 Oct.

Price: Free, drop-in (you may have to queue when you arrive at the Museum)