"The Mill and the Cross" - film screening with filmmaker Lech Majewski 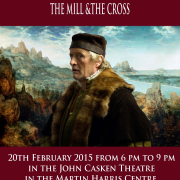 Russian and East European Studies and the University of Manchester Polish Student Society are hosting a meeting with the Polish artist, filmmaker, poet and stage director Lech Majewski followed by a screening of his film THE MILL &THE CROSS (2011). The film is in English.

Lech Majewski – a widely reputed Polish visual artist with a retrospective at the Museum of Modern Art in New York and artworks on view at the Venice Biennale – created his motion picture THE MILL &THE CROSS based Peter Bruegel’s painting The Way to Calvary. The work is a unique digital tapestry, composed of layer upon layer of perspective, atmospheric phenomena and people, which required countless patience and imagination as well as the use of new CG technology and 3D effects. In THE MILL & THE CROSS, Rutger Hauer plays Peter Bruegel. Michael York plays his friend Jonghelinck, a banker and art collector and Charlotte Rampling portrays Mary. For more information on THE MILL & THE CROSS: http://www.themillandthecross.com/