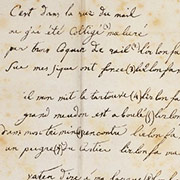 Victor Hugo published The Last Day of a Condemned Man in 1829. Initially published anonymously, this novel argues against the death penalty (which was only abolished in France in 1981).

In this presentation at the John Rylands Library, you will be shown five different editions of this book, in French, English and Hebrew, published between 1829 and 1990.

The differences on editions, which will be demonstrated, will shed light on the influence of historical and social context of this work. Following the presentation there will be a more general discussion about the death penalty in France and in the UK.

A good intermediate level of French is recommended to be able to participate in the discussion.