Screening of Moving Memories: Tales from Moss Side and Hulme 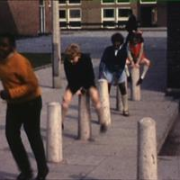 A screening of Moving Memories: Tales from Moss Side and Hulme (2009, 30 mins), followed by a Q&A with producer and director Karen Gabay

This nostalgic and award-winning film tells the story of the first and second generation immigrants in Hulme and Moss Side, particularly those of Caribbean, Sikh and Irish heritage, from the 1950s to the 1980s. It mixes historic BBC footage held at the North West Film Archive with contemporary interviews, allowing local people to tell the story in their own words. Includes scenes at Webster Street Primary School, the Crescents, the Nile Club and of the infamous riots.

This event is free but booking is essential.