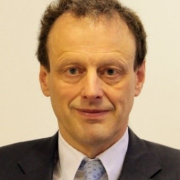 From self-stratifying films to levelling up: A random walk through polymer physics and science policy.

How could you make a paint-on solar cell? How could you propel a nanobot? Should the public worry about the world being consumed by “grey goo”, as portrayed by the most futuristic visions of nanotechnology? Is the highly unbalanced regional economy of the UK connected to the very uneven distribution of government R&D funding?

In this lecture I will attempt to draw together some themes both from my career as an experimental polymer physicist, and from my attempts to influence national science and innovation policy. From polymer physics, I’ll discuss the way phase separation in thin polymer films is affected by the presence of surfaces and interfaces, and how in some circumstances this can result in films that “self-stratify” - spontaneously separating into two layers, a favourable morphology for an organic solar cell.

I’ll recall the public controversies around nanotechnology in the 2000s. There were some interesting scientific misconceptions underlying these debates, and addressing these suggested some new scientific directions, such as the discovery of new mechanisms for self-propelling nano- and micro- scale particles in fluids. Finally, I will cover some issues around the economics of innovation and the UK’s current problems of stagnant productivity and regional inequality, reflecting on my experience as a scientist attempting to influence national political debates

Richard Jones is Vice-President for Regional Innovation and Civic Engagement at the University of Manchester; he is an experimental soft matter physicist. His first degree and PhD in Physics both come from Cambridge University, and following postdoctoral work at Cornell University, U.S.A., he was a lecturer at the University of Cambridge’s Cavendish Laboratory. He was a Professor of Physics at the University of Sheffield from 1998, moving to Manchester in 2020. In 2006 he was elected a Fellow of the Royal Society in recognition of his work in the field of polymers and biopolymers at surfaces and interfaces, and in 2009 he won the Tabor Medal of the UK’s Institute of Physics for his contributions to nanoscience. He is the author of more than 190 research papers, and three books, Polymers at Surfaces and Interfaces (with Randal Richards, CUP 1999), Soft Condensed Matter, (OUP 2002), and Soft Machines: nanotechnology and life (OUP 2004). He was PVC for Research and Innovation at Sheffield from 2009 to 2016, was a member of EPSRC Council from 2013 – 2018, and chaired Research England’s Technical Advisory Group for the Knowledge Exchange Framework. He was a member of the Sheffield/Manchester Industrial Strategy Commission, and has written extensively about science and innovation policy, for example in the recent report “The Missing Four Billion: making research and development work for the whole UK” (with Tom Forth, NESTA 2020).