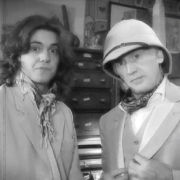 In The Manchester Museum's Unearthed: Ancient Egypt exhibition, you can help Egyptologist, Dr Digby (played on film by Terry Deary, author of Horrible Histories and Egyptian Tales) investigate and record his finds. These include toys, farming tools, stone carvings and burial goods, which can help us understand the ancient Egyptians’ home life, working life, language and beliefs.

What object do you think would tell future archaeologists the most about you?

Remember to include your contact details with your entry – name, address, phone number and email address (if you have one). The winner will be announced by Tuesday 30 August 2011.

The winner gets to meet the author of Horrible Histories and Egyptian Tales, Terry Deary, in person and gets a signed copy of a book from his Egyptian Tales series.

1 winner will be chosen. The winner and their family (up to 5 people) will be invited to the Museum on Thursday 29 September, 4pm, to meet Terry Deary and receive a signed copy of a book from his Egyptian Tales series.