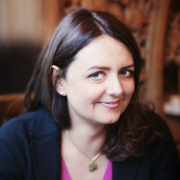 Kung Pao or Gong Bao chicken is one of the best known Chinese dishes, almost universally adored and found on menus everywhere from state banquets in Beijing to the American fast-food chain Panda Express. It is even one of the dishes provided to Chinese astronauts on their voyages into space. But where does the dish actually come from, and what can it tell us about Chinese food culture in general?

In this talk, cook and food writer Fuchsia Dunlop recounts her investigations into the origins of Kung Pao chicken, from southwestern Guizhou Province, via Shandong, the home region of Confucius to the Sichuanese capital, Chengdu. Touching on matters both culinary and cultural, she shows how the dish expresses some of the key themes of Chinese cooking and gastronomy, and asks what it can tell us about the evolution and invention of Chinese regional cuisines.

Biography: Fuchsia Dunlop is an award-winning cook and food writer specialising in Chinese cuisine. She trained as a chef at the Sichuan Higher Institute of Cuisine in the 1990s, and has been researching Chinese food and culinary culture for more than two decades. Fuchsia is the author of six books about Chinese cuisine, including the critically-acclaimed memoir Shark’s Fin and Sichuan Pepper, and, most recently, The Food of Sichuan (winner of the 2020 Fortnum and Mason Cookbook Award), both of which have been translated into Chinese. Aside from her books, her writing has appeared in numerous publications such as FT Weekend, The Economist 1843, Observer Food Monthly, Saveur, Lucky Peach and The New Yorker.