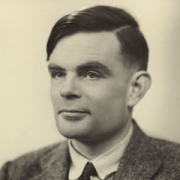 Inspired by 1950s design and combining Alan Turing’s notes with museum objects, this exhibition documents Turing’s investigation into one of the great mysteries of nature: how complex shapes and patterns arise from simple balls of cells.

This year marks the centenary of the birth of Alan Turing, one of the leading thinkers of the 20th century. Best known as a pioneer in the development of the computer and for helping crack the Enigma code during World War II, Alan Turing also made a single contribution to biology. From 1948 until his death in 1954, Turing worked on the early computers at The University of Manchester, working in the building next door to The Manchester Museum. At a time when people knew very little about genetics or DNA, Turing used the early computer to try to crack how a soup of cells and chemicals could transform itself and grow into complex natural shapes - a subject known as morphogenesis. In an incredible article published in 1952, Turing suggested that everything from the spots and stripes on animals to the arrangement of pine cones and flowers could be explained by the interactions between two chemicals. Turing’s work in this area is intimately connected with the timing of his trial and conviction for homosexuality, and his subsequent ‘treatment’ with a course of chemical injections.

Find out about the impact and continuing relevance of Turing’s work to experts at The University of Manchester and take part in a range of public events for all ages and interests.