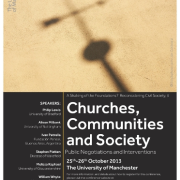 In contemporary British society, Christian religion refuses to stay in its place. Unruly, it is established in some places (England, Scotland) and yet in all places numerically in decline; public, and yet caught off guard by an Occupy movement; suborned, and yet capable of protest; lordly, and yet attempting to represent the common good; proactively interfaith, and yet caught up in its own internal concerns; national, yet present in very different ways in city and country; a witness for peace, and yet offering pastoral support to all.

It remains true that the older Christian denominations decrease in size, and with this comes a certain defensiveness. Admittedly, this decline is sometimes obscured by immigration from within the European Union and the growth of Christian churches that are the result of “Empire”. Nonetheless, British Christianities remain public in remarkably diverse ways and vigorously active in civil society. Witness the furore over Sharia, an Archbishop penning a column in Britain’s best-selling tabloid, and the dispute over whether public prayers should be banned. The 2008 report Moral, But No Compass: Government, Church and the Future of Welfare gave some indication of the formal engagement of the churches in civil society. The informal contribution of the churches to social capital in civil society is incalculable.

This publicness is mixed: it is not always to the credit of these Christianities. The reception is mixed, too: the wider culture continues to find Christianities fascinating and infuriating—and not always for the best of reasons. Yet there is a grudging, common recognition that the challenges British society faces—climate change, for example—require moral resources that are not generated by consumerism.

This is not only an issue for the churches in the UK. So there will be an important international dimension to the conference with papers from the contexts of India and Argentina.

This two-day conference explores some of the issues, concerns and contradictions generated by this remarkable state of affairs. It does so from a variety of perspectives: theological, ethical, political, and social. And the voices raised range from the concerned to the sceptical.

Concessions: For staff and postgraduate students at the University of Manchester, the conference is FREE. However, you MUST register with the conference administrator, Hannah Mansell.