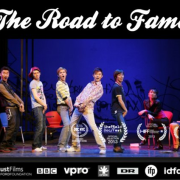 Don't miss your chance to see 'The Road to Fame' and chat with its rising-star Chinese director Hao Wu before the film's premiere on BBC4!

This new documentary chronicles the staging of the American musical 'Fame'—China’s first official collaboration with Broadway—by the senior class at China's top drama academy, telling the story of a new generation in the People's Republic of China.

Biography: Originally trained as a molecular biologist, Hao Wu now travels between the Internet and filmmaking worlds. He directed and produced Beijing or Bust, his first feature documentary that was shown on American Public Broadcasting Service. In addition to The Road to Fame, he is producing Zanta, a feature documentary about a Tibetan widow’s struggle to raise her son in Beijing. In the Internet world, Hao has worked in management positions in Silicon Valley and with Alibaba and Yahoo in China. From 2008-2011, he was the China Country Manager for TripAdvisor. Hao now lives in Beijing, developing documentary projects full-time. He holds a Master of Science degree from Brandeis University, an MBA from the University of Michigan Ross School of Business, and a Certificate in Digital Video Production from the Beijing Film Academy.