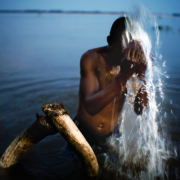 Nyaba L. Ouedraogo is a self-taught photographer born in Burkina Faso, and now working and living between Paris and West Africa. The Phantoms of the Congo River is a photography exhibition which is both a ballad to, and a deconstruction of, Joseph Conrad’s famous 19th century novel Heart of Darkness, which explored European colonialism and racism through the journey of an ivory transporter down the Congo River. Ouedraogo constructs his own scenes from the Congo, re-enacting scenes from the novel and following the journey taken in it, while questioning notions of savagery and the residues of colonialism. This exploration of territory through photography reminds us both of the development of colonial Africa, and the rich history of the people who live on the Congo’s banks. Ouedraogo’s photographs will be accompanied by some of Manchester Museum’s own objects from the Congo.

The setting for the images is the riverbanks of Brazzaville in the Republic of the Congo. The artist describes the works as ‘photographic poetry’; he uses the language of rituals and the mystical to express his vision, as opposed to describing the reality of life. Ouedraogo’s photographs are structured around oppositions; violence and peace, shadows and light, and show the humanity of life on the Congo River.