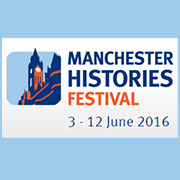 Historian and broadcaster Michael Wood brings the Seven Ages of Manchester alive in this illustrated talk taking you on a journey through the Roman settlement, the Anglo-Saxon burh, and the medieval textile town, the 'fairest and quickest town in Lancashire” described by the Tudor traveller John Leland; then the mid 18th century and the birth of the Industrial Revolution, to the 19th century ‘City of the World' and the new post Industrial Manchester of today.

Historian and broadcaster Michael Wood is the author of several highly praised books on English history and well over one hundred documentary films, among them In the Footsteps of Alexander the GreatandThe Story of India,which the Wall Street Journal described as ‘still the gold standard’ of documentary history making. The Independent newspaper called his Story of England, which told the tale of one village, Kibworth in Leicestershire, through British history, ‘the most innovative history series ever on TV’.

Michael was born in Manchester, and educated at Manchester Grammar School and Oriel College Oxford, where he did post-graduate research in Anglo-Saxon history, on which he has written many academic articles. Currently Professor of Public History at the University of Manchester, Michael was recently awarded the Historical Association’s Medlicott Medal for ’outstanding services and current contributions to history’ and in 2015 he received the British Academy’s President’s Medal for outreach in history. Michael lives with his family in North London.