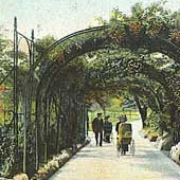 This exhibition examines and explores how the role of Manchester’s Whitworth Park has changed over time. The displays are the result of a local archaeology project and the myriad of objects reflect the important role that the park has played for the local community over the years. Whitworth Park: Pleasure, Play and Politics will appeal to those with an interest in social and local history and reveal some surprising secrets about this popular city park.

This exhibition tells the story of Whitworth Park on Oxford Road in Manchester and presents the fascinating discoveries that came to light during the recent community archaeology and history project. The project involves a wide range of local people, Friends of Whitworth Park and students and staff from The University of Manchester. The finds reveal the story of a very popular Victorian and Edwardian park that was an integral feature of Whitworth Art Gallery when it opened in 1890. Of particular interest are the children’s toys dropped in the boating lake/paddling pool and recovered by archaeologists over one hundred years later. Other finds shed light on the relationship between the behaviour expected of visitors to the park and what happened in reality. The exhibition reveals the full range of attractions offered by the park including bandstand, boating lake, statues, drinking fountains and formal planting schemes. Although many of these features have now disappeared the park is still a rich centre of biodiversity in the city. The community archaeology project supports the campaign led by The Friends of Whitworth Park and the redevelopment of Whitworth Art Gallery in stimulating excitement about the park and its future.