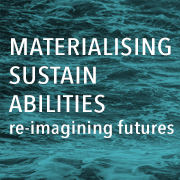 The Sustainable Consumption Institute will hold a half-day event to celebrate over a decade of cutting edge research and to launch a new research agenda marking our next phase as an institute. The theme is 'Materialising sustainabilities, reimagining futures', which captures our aims to both deepen and extend our thinking about the urgent socio-technical and political challenges of our time. The event will involve a series of short talks about ideas, practices, strategies and innovations for changing dominant modes of provision and moving towards more sustainable societies. The speakers will include academics working in the SCI and high profile guests drawn from the policy, enterprise and activist sectors. Their talks will be pitched to an interested lay audience and designed to provoke discussion and debate. The event will be followed by a wine reception.

Secure your place now by emailing sci@manchester.ac.uk and we will get back to you soon with more details on confirmed speakers and the programme for the day.

Biography: Martine Postma is a Dutch environmentalist and former journalist, best known for creating the concept of Repair Café. She organised the first Repair Café in Amsterdam in 2009 and has been spreading the concept worldwide ever since.Today, there are over 1900 Repair Cafés, in 35 countries, spread over six continents, this truly is a global movement. In 2018, the combined efforts of Repair Cafés around the world managed to save an estimated 350,000 kilos of waste from landfills.

Biography: Magid, who came to the UK aged five as a refugee from Burao in northern Somalia (now in Somaliland), is an activist and politician. He was the first ethnic Somali, the youngest-ever, and the first Green Party councillor to hold the role, and spent 12 months as deputy lord mayor. He studied zoology and marine biology at the University of Hull, becoming the president of the student union. At 28, he was the youngest person ever to hold the ceremonial title of Lord Mayor of Sheffield and served on this capacity from May 2018 to May 2019. In May 2019, he was elected to the European Parliament as Green Party MEP for Yorkshire and the Humber.

Biography: Nissa is an Urbanist at Connected Places Catapult, specialising in Planning, Technology, Data and Cities. She has a strong track record and over 5 years working in planning, development management, development strategy, along with experience of business development in the field of the built environment. Her work at CPC has involved engaging with the planning process to develop concepts and help prototype new tools and innovations that work to disrupt the wider industry as part of the trailblazing Future of Planning Programme. She has developed policy recommendations for innovation location strategies abroad and worked in multi-disciplinary teams to deliver horizon scanning research into how technology is going to change the way our cities are built.

Biography: Mahadi Hussein Sharif-Mahamed is a Manchester City Councillor for Moss Side and currently Assistant Executive Member for Children and Schools. Until recently he was Assistant Executive Member for Neighbourhoods, which involves working on issues of equalities, community cohesion, and local environmental quality across Manchester. An advocate for refugees and human rights, he is studying for an MSc in the Global Development Institute at the University of Manchester.