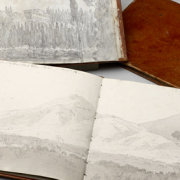 Father and son, Alexander and John Robert Cozens, were influential watercolour painters of the 18th century. Alexander was a drawing master who dedicated his career to teaching young men and the aristocracy how to create landscapes without needing to attend the Royal Academy.

This resulted in the publication of multiple guides demonstrating how to create the ideal landscape from a catalogue of features, such as clouds, mountains and trees. Consequently, many of Alexander’s surviving works are fictional landscapes. Alexander argued that landscape images could evoke particular states of mind or moral feelings in the viewer. He became known as the ‘blot master’ for creating improvised compositions from random markings, an idea first suggested by Leonardo da Vinci. His theories elevated the status of landscape painting in the 18th century and helped propel art practice towards the freedom that resulted in Abstract Expressionism.

Visually John Robert inherited the skill of his father, but by contrast his works were honest accounts of his travels. The Romantic painter John Constable declared that John Robert ‘was the greatest genius that ever touched landscape’ as his work ‘was all poetry’. Painting a landscape with watercolours was traditionally for topography, mapping landscapes. Watercolour was ideal as it was portable and could be used to ‘tint’ or ‘stain’ a map within the lines without distorting it. John Robert revolutionized landscapes by painting with watercolour to create mystery and emotion in the places he depicted.

The Whitworth owns nineteen watercolours and a rare oil by Alexander, one of only five known to exist. The gallery owns seventeen watercolors and thirteen soft-ground etchings by John Robert. Seven sketchbooks from his Grand Tours of Europe in 1782-3 have been digitized allowing visitors to see every page for the first time. They are unique in the world and were copied by JMW Turner and Thomas Girtin in the 1790s. This exhibition showcases the Whitworth’s collection of works by father and son, the largest outside of London. By drawing on their uniting elements of trees and European exploration, visitors will gain a rare insight into the practices of 18th century artists.