Felix Wemheuer - "Great achievements, big failures: How to evaluate the social changes of the Mao era" 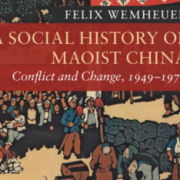 In the Mao Era (1949–1976), millions of Chinese people experienced social upward mobility, while others were marginalised or lost their lives. Efforts to build a communist society created hopes, dreams, fear, enthusiasm, disillusion, painful disappointments and nostalgia. The Chinese people made great strides, but they also experienced traumatic setbacks. The talk will discuss the achievements and failures related to economic growth, access to basic entitlements, and social mobility and change. Furthermore, the question will be discussed how we are to judge success. On the question of progress in human rights, should we confine ourselves to the CCP’s own goals, or should we instead stress today’s accepted metrics, such as the UN’s Human Development Index? Should we compare the Mao era to pre-1949 Republican China, to the relatively peaceful Nanjing Decade under the GMD before the Sino-Japanese War (1928–1937), to the progress of Taiwan after 1949 or to developments in the Reform era since 1978?

Felix Wemheuer is Professor for Modern China Studies at the University of Cologne. He belongs to a new generation of Western scholars who are rewriting the history of Maoist China. His publications include Famine Politics in Maoist China and the Soviet Union (Yale UP 2014) and A Social History of Maoist China: Conflict and Change, 1949-1976 (Cambridge UP 2019). Between 2008 and 2010, he was a visiting scholar at the Fairbank Center at Harvard University.