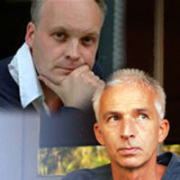 Rupert Thomson is the author of eight highly acclaimed novels, Dreams of Leaving, The Five Gates of Hell, Air and Fire, The Insult, Soft, The Book of Revelation, Divided Kingdom and Death of a Murderer, which was shortlisted for the 2008 Costa Novel Award. His memoir This Party's Got to Stop was published by Granta Books in 2009

Patrick McGuinness was born in Tunisia in 1968 of Belgian and Newcastle Irish parents, and brought up in Iran, Venezuela, France, Belgium and Romania. He now teaches French in Oxford, where he is Professor of French and Comparative Literature. McGuinness's books include two collections of poems, The Canals of Mars (2004), and Jilted City (2010), and several editions, notably of the modernist poet Lynette Roberts and T.E. Hulme , and a translation of Mallarmé's For Anatole's Tomb. Jilted City was a Poetry Book Society Recommendation, and has appeared in Italian as L'Età della Sedia Vuota.