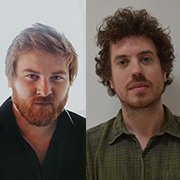 Rory Gleeson is an author and screenwriter. He graduated with a BA in Psychology from Trinity College Dublin, and went on to study at Oxford and UEA. He graduated with an MA in Creative Writing Fiction from The University of Manchester in 2013. His writing has featured in The Irish Times, The Town Crier, RTÉ Culture, Miscellany Magazine and Far Off Places Magazine. His debut novel Rockadoon Shore was published by John Murray in January 2017. It was chosen as the Eason Book Club 'Book of the Month' by NewstalkFM, and was one of the Dubray Recommends picks for February. He lives in London.

Alys Conran is from north west Wales and is author of 'Pigeon' (Parthian Books, 2016), the first novel to be published simultaneously in English and Welsh. Pigeon is longlisted for the International Dylan Thomas Prize. Her short fiction has been placed in the Bristol, Manchester and Bath short story prizes. She also writes poetry and translations and her work is to be found in numerous anthologies and magazines. She graduated with distinction from the MA at the Centre for New Writing in 2012 and is now Lecturer in Creative Writing at Bangor. She is currently working, with the support of a scholarship, on a second novel about the legacy of the Raj in contemporary British life.

Joey Connolly grew up in Sheffield and studied in Manchester. Now he lives in London, where he is the manager of the Poetry Book Fair. His poetry and criticism have appeared in The Poetry Review, Poetry London, The Sunday Times and Best British Poetry 2014 (Salt), as well as on BBC Radio 4. He received an Eric Gregory award in 2012, and his first collection, Long Pass, is published by Carcanet.