Nick McGee - The ‘Coolie’ and the ‘Comity of Nations’: Human Trafficking, Foreign Advisors and the Incorporation of Qing China into an Unequal Liberal Order [ECR Workshop] 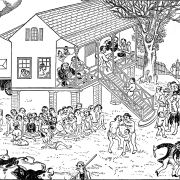 By the 1860s, Qing China was facing an unprecedented crisis of human trafficking in coerced “coolie” labourers from its southern coast to the Americas. For assistance with this intractable transnational problem, the dynasty’s new foreign affairs bureau turned to Robert Hart, the head of China’s Imperial Maritime Customs. Together they collaborated on the 1866 Chinese Labour Convention, attempts to buy the colony of Macau, and the 1874 Commission to Cuba.

This paper explores the efforts of Hart and other foreigners to use these joint endeavours against human trafficking to unequally incorporate the Qing state into a global liberal “comity of nations”, alongside the gradual realization by Qing elites of the subordinate position China was to be accorded within this new order.