Legacies of Slavery and Abolition in Manchester 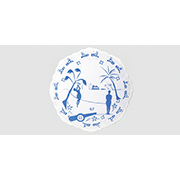 An exhibition sharing the story of the Atlantic Slave Trade and its legacies in Manchester and around the world, with original artefacts, contemporary artworks and new research from The Portico Library, Manchester Art Gallery, Tiwani Contemporary and private collections.

Writer, lecturer and historian Natalie Zacek has headed a team of researchers and artists to develop an exhibition and events programme revealing the networks of slave ownership in 18th and 19th-century Manchester and their legacies around the world. The exhibition focuses on the numerous ways in which the city of Manchester and its inhabitants, especially those who were involved with The Portico Library in its early years, were connected to the history of slavery and its abolition. Through the display of historic texts, images, maps, and artefacts, it explores the ways in which late Georgian concepts of gentility rested upon the practices and profits of slavery. It also includes works in various media, created by artists of African descent, which dramatise the relationships between “home” and “away,” empire and colony, and slavery and freedom, all topics of constant debate within The Portico Library and on the streets of Manchester at the dawn of the nineteenth century.