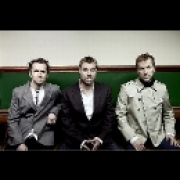 Jimi Goodwin and twin brothers Jez and Andy Williams have known each other since they were 15. They started playing together seriously about 20 years ago but, as Jimi notes, “We were wagging school and jamming way before that”. As Sub Sub (graduates of a Hacienda-inspired Manchester club land explosion of the late eighties) the band scored some dance inflected hits which kind of painted them into a corner. The number one selling “Ain’t No Love (Ain’t No Use)” was released on New Order manager Rob Gretton’s label. “We kind of lost our way for a few years”, admits Jez. As newly named Doves, 2000’s Lost Souls, a record wrought from hard-bitten experience, put their train back on the rails. Nobody could have been ready for the attention it brought them.” The Last Broadcast, a record which realised all expectations, was an unbelievably assured second LP. It was heralded as a masterpiece on release, spent two weeks at number 1 in the UK, and, like Lost Souls, was nominated for the Mercury Prize.

Some Cities arrived almost three years after The Last Broadcast. It was conceived as a shorter, more forceful record than its two predecessors. Its bona fide hit single in the Motown inspired “Black And White Town” opened up new commercial possibilities for the group. Perhaps typically, making money and knocking out a whole new album of Black and White Towns was never really going to interest them...