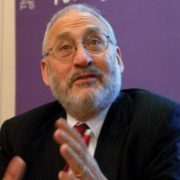 The debate will launch a two week summer school organised by the University’s Brooks World Poverty Institute which is Chaired by Professor Stiglitz.

All events take place at The University of Manchester, are free to attend and open to all.

Other highlights include a discussion with a panel of experts including - Professor Mohan Munasinghe - on “Climate Change and Climate Justice” on June 16.

He is one of the world's leading economists, a co-laureate of the 2007 Nobel Prize for Peace and Vice Chair of the UN Intergovernmental Panel on Climate Change.

And on 22 June there will be a public panel discussion between Professor Stiglitz and fellow Nobel prize winner Professor John Sulston on intellectual property.

Professor Sulston is Chair of the University’s Institute for Science, Ethics and Innovation. He was awarded the Nobel Prize for Physiology or Medicine in 2002.