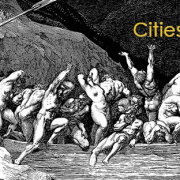 As part of the global Inferno project to bring to life Dante's vision of Hell using sound, Cities and Memory developed a unique collaborative soundtrack to the 1911 silent film L'Inferno. More than 80 artists from all over the world contributed to the project, with a soundtrack woven together from their contributions to bring the sound design techniques of the 2020s (and some contemporary issues and concerns) to Dante's masterpiece. We'll be joined by Dr Guyda Armstrong (Senior Lecturer in Italian and Digital Lead at the John Rylands Research Institute) and Stuart Fowkes, founder of Cities and Memory, to discuss the many creative interpretations of Dante’s work, and to explore the inspiration behind the re-visioning of this monochrome masterpiece. Taking 3 years to make and first shown in Naples in 1911, L'Inferno charts the journey of Dante. Guided by the ancient Roman poet Virgil, sent to rescue him by his beloved Beatrice, Dante and Virgil descend through the circles of Hell where they witness the torments of the damned. Dante's work has been retold and reinterpreted many times over its 700-year history and remains a powerful and enduring piece of literature.

The evening will include an introduction to the film and Q&A.

To book your free ticket please follow the link https://www.eventbrite.co.uk/e/film-screening-dantes-inferno-reimagined-in-sound-tickets-312168503397