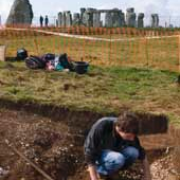 Photos by Bill Bevan and emotive texts capture the feelings of archaeologists, some from The University of Manchester, as they dig and make discoveries near this renowned sacred site.

In 2008 archaeologists gathered near Stonehenge to carry out internationally important archaeological research - the Stonehenge Riverside Project. This gathering of archaeologists from a variety of places and backgrounds to undertake shared labour echoed the original purpose of Stonehenge as a ceremonial centre for prehistoric communities.

As well as capturing the feelings and emotions of the archaeologists as they work, the photos and texts document the structured approach archaeologists take to excavate ancient sites.

"I quickly took to the pace of an archaeological excavation, the slow-slow-quick pace of work, and tried to work with my camera in the same way as the archaeologists were working with their tools - to frame decisive moments in time - in order to convey the way archaeologists work. It was a privilege to be granted such open access by the team and an amazing experience to be working in the shadow of Stonehenge, Britain's most iconic prehistoric monument." Bill Bevan