The 19 August 1953 Sixty Years on: The Fall of Mossadegh Revisited 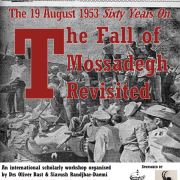 A Workshop organised by MIHAN - The Manchester Iranian History Academic Network in collaboration with the Iran Heritage Foundation and the British Institute for Persian Studies. The events of 19 August 1953 have been one of the most discussed moments of modern Iranian history. Sixty years on, historians' opinions about the reasons for the downfall of Prime Minister Mossadegh are divided. On the one hand, there is a majority of scholars who emphasise the role of foreign powers focusing on the activities of the CIA and their British helpers, while on the other hand, a somewhat smaller group considers domestic factors, such as a truly genuine outbreak of anti-government sentiment or the autonomous action of hitherto unsuspected senior clergy, as having provided the decisive spark. Our workshop brings these two historiographical strands (and several others) together in one single scholarly event for the very first time.

Price: Free, but subject to mandatory registration via workshop website.

Offers: The Friday component of the event is streamed live on the Internet via the conference website