After Hours: Warriors of the Plains 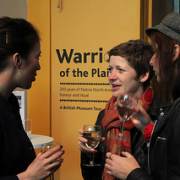 Explore the Warriors of the Plain and Living Cultures gallery for our After Hours in October. See museum objects normally in store, have a go at Native American beading with crafter Caroline Coates, find out about the Salford Sioux and browse books about Plains Indians on loan from the Ahmed Iqbal Ullah Race Relations Resource Centre.

The Mustard Tree Drama Group is based at The Mustard Tree, a centre who supports vulnerable and marginalised adults. The group meet weekly and take part in drama workshops to develop teamwork and theatre skills whilst improving confidence and self esteem. The drama group have been struck by the history of the American Plains Indians. How they were evicted from their homelands and the trauma caused by alcohol and substance misuse. In response to this the drama group have created a piece focusing on the ideas of place, home, belonging and displacement.