The American Scene: Prints from Hopper to Pollock 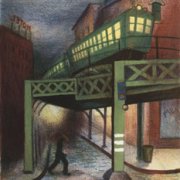 Printmakers in the United States in the first half of the 20th century produced some of the most exciting, original and defining images of modern American life.

Beginning with John Sloan and the Ashcan School of urban realism in the early 1900s, artists adopted a wide variety of print media to depict the American Scene, from the evocative cityscapes of Edward Hopper and Martin Lewis to romanticised views of the rural heartlands by Thomas Hart Benton and the young Jackson Pollock.

During the 1930s the Depression provided a strong vein of socially conscious subject matter, and new techniques such as screenprinting and other experimental media were explored. With the Second World War, America became increasingly international in its outlook, emerging after the war as a superpower, and the American Scene declined in its importance. The arrival in the United States of European exiles such as Josef Albers and Stanley William Hayter introduced geometrical abstraction and experiments with surreaism, culminating in the abstract expressionism that became the hallmark of the American avant-garde in the 1950s.

The exhibition is touring from the British Museum, which holds the most comprehensive collection of American prints of this period outside the United States.