The Myth of American Omnipotence: Strength and Limits of US Influence in Iran during the Johnson Administration (1963-1969) 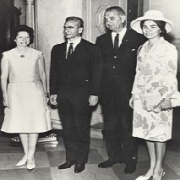 American involvement in the overthrow of Prime Minister Mohammad Mossadegh in August 1953 left a profound mark on Iranians’ perception of the United States, crucially contributing to establishing the myth of America’s omnipotence in Iranian politics. The quick transformation of Iran into a US client state in the aftermath of the 1953 coup further reinforced this belief. This talk will assess the reality of American influence in Iran during the 1960s, a phase seeing a profound redefinition of the patterns of the relationship between the US and Iran. In this context the administration of Lyndon Johnson played a crucial role. During LBJ’s time in office, the Shah’s growing impatience with his public image as a puppet of Washington, Iran’s increasing stability and economic growth, and the inevitable reassessment of US commitment in the Third World in the shadow of Vietnam, significantly altered the terms of US-Iranian relations. By the middle of the decade the country’s economic take-off, combined with the growing control of the Shah over the main centres of power, led the Iranian sovereign to enjoy an increasing autonomy both from the need to build domestic consensus and from the necessity to placate the wishes of his American ally. In this framework, the Shah’s assertiveness, his ambitious regional policy, and the booming oil revenues led to a definitive rejection of the perception of Iran as the weak country that had come out the crisis of 1953. A new era was beginning, bound to irreversibly alter the future of the alliance and of Iranian history: it was to be characterised by the growing role of the Shah as undisputed leader, by increased autonomy of the regime from its American patron, and by even greater hostility to the influence the United States was exercising in Iranian politics, just at a time when the US’s actual leverage started to decline significantly.

Dr Claudia Castiglioni is a Research Fellow at Ca’ Foscari University of Venice and Adjunct Lecturer at the Institut d'études politiques de Paris. She holds a PhD in History of International Relations from the University of Florence (2011). Her main research interests include US foreign policy in the Middle East during the Cold War, Iranian political and economic development, and energy politics. She has written articles and book chapters on the international history of Iran during the Cold War, American modernisation theory and its impact on Iranian development. Her current project focuses on the reshaping of the political and economic partnership between Tehran and some selected Western European countries after the revolution of 1979.