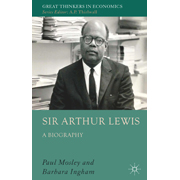 Why are poor countries poor? How can they get out of the poverty trap?

Sir Arthur Lewis (1915-1991) was the first person to answer these questions in a systematic way. He was also the first Afro-Caribbean to be a professor at a British university, and in 1979 became the first black man to win the Nobel Prize for Economics. He had to fight prejudice, in a way which is hard to imagine today.

Lewis believed 'that economics 'concerns life more than numbers'. In the 1950s and 60s, alongside his academic work, he campaigned for a fair deal for the poor, in Africa, the West Indies and Manchester.

Barbara Ingham and Paul Mosley's biography describes the man, and the social relationships, behind these astonishing achievements. They consider Lewis' friendships, rivalries and the societies in which he attempted, sometimes happily and sometimes disastrously, to intervene.