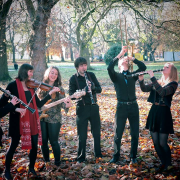 Each year, as part of the Ensemble Performance module, a new group of Music students becomes the latest incarnation of the klezmer ensemble named after the late Michael Kahan (Manchester classical and klezmer violinist). In this concert, the group offers its take on the horas, freylekhs, khosidls, and bulgars that originated in the former shtetls of Eastern European Jewry. These young klezmorim not only immerse themselves in the aural traditions of this largely unfamiliar Jewish sound-scape but also make their contribution to its revival as they develop their own arrangements to suit the eclectic instruments (from piccolo to banjo, baritone sax to trombone) available to them