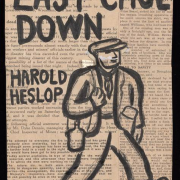 What the Papers Say

Filling over 1,100 boxes, the archive of the Guardian newspaper is one of the Library’s largest and most significant archives, but until now it has been very poorly documented. This talk outlines several exciting new initiatives we are engaged in to enhance the catalogue for this collection and unlock its full potential for researchers and other audiences. It will also reveal some of the fascinating stories that are emerging from the archive as part of this work.

Wars of position: Communists on the media in 1930s Britain

The answer to the urgent question posed by Lenin in What is to be done? (1902) was very clear: set up a national newspaper. Newspapers were central to the identities of the Soviet-inspired Communist Parties in the twentieth-century, seeming to provide a means to expose the capitalist system and to organise the revolutionary forces in opposition. Communists in the West, however, increasingly found themselves operating in a thickly layered and rapidly changing media landscape of national radio, newsreels, mass-circulation tabloid and picture newspapers and emerging television. This talk asks how Communists in Britain navigated that landscape in the 1930s. Taking 'Communism on the media' in both senses, it explores how Communists analysed the media, and how they struggled to project their alternative worldview through it.

Organisation: The University of Manchester Library

Biography: Dr Ben Harker is Lecturer in Twentieth-century British Literature at the University of Manchester. He is the author of Class Act: The Cultural and Political Life of Ewan MacColl (2007) and the co-editor of British Communism: A Documentary History (2011). An editor of the journals Key Words: A Journal of Cultural Materialism and Twentieth Century Communism, he is currently an AHRC Leadership Fellow for a project entitled ‘Wars of Position: Communism and Civil Society.’