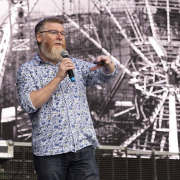 One Giant Leap: Jodrell Bank and the Race to the Moon By Professor Tim O’Brien

July 2019 will mark fifty years since humans first set foot on another celestial body. In the run up to the anniversary, Professor Tim O’Brien will tell the story of Jodrell Bank’s role in the race to the Moon. This entertaining presentation will include audio-visual material from Jodrell Bank’s archive and feature aspects of both the American and Russian space programmes.

Tim O’Brien is a Professor of Astrophysics and an Associate Director of Jodrell Bank Centre for Astrophysics at The University of Manchester.

He has published around 150 research papers, mainly on the study of thermonuclear explosions on white dwarf stars in binary systems. He has used a wide range of telescopes around the world and in space, including the e-MERLIN radio telescopes operated from Jodrell Bank, X-ray satellites, the Hubble Space Telescope and the Very Large Telescope in Chile. Most recently, he has begun work on the search for extra-terrestrial intelligence using radio telescopes (he hasn’t found any yet).

Tim is also a director for Jodrell Bank’s annual festival of discovery, bluedot where he regularly presents science talks on the main stage to thousands of festival-goers. He also helps programme the festival’s popular DotTalks series featuring some of the UK’s leading scientists and thinkers. The 2019 bluedot festival will celebrate the 50th anniversary of the moon landings.