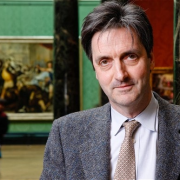 Whitworth Studies aims to encourage and support a wide range of research projects between the Whitworth and Art History and Visual Studies (AHVS), artists, other parts of the University of Manchester, and visiting researchers from other universities. This research activity will result in exhibitions, conferences, lecture series, events, performances, and research on the Whitworth’s collections.

Internationally recognised researchers, from the University of Manchester and beyond, will give public lectures and presentations of many kinds, as well as artists talking about their work. Whitworth Studies will also encourage experimental encounters with research and experimental forms of presenting research as a signature aspect of its public programme.

The Whitworth Studies programme is designed to appeal to the highly engaged Whitworth public; students with interests in visual culture; researchers at all levels who want to stage or present research on visual culture; and the wider art community of Manchester and the North West.

The lecture will begin by looking at how Raphael himself was able to absorb ideas found in the art of the distant and the recent past and will then explore how prints altered the nature of artistic memory, explaining how engravings after Raphael’s own paintings and drawings enabled artists from Tintoretto to Picasso to give new life to his inventions. The variety of these responses is the best testimony we have to Raphael’s genius. Sir Nicholas Penny has held academic posts at the Universities of Cambridge, Manchester, and Oxford, where he was Slade Professor. He is the co-author, with Francis Haskell, of Taste and the Antique (1984), a study of the formation of the canon of classical sculpture. Between 1984 and 1989 Penny was keeper of the department of Western art at the Ashmolean Museum. In 1990 he joined the National Gallery as Clore Curator of Renaissance Painting. In 1991 he identified the Madonna of the Pinks as a genuine Raphael, and not a copy of a lost original as was previously supposed.